When I first started my record collection some years back, one of my prized LPs was Miles Ahead!, a Prestige disc of Miles Davis sessions from 1953.  Jazz aficionados may know this record because side A features Charlie Parker on tenor sax, sharing the spotlight with a young Sonny Rollins.  I haven’t found a good chart for this tune, so here it is (with intro and interlude):

Here’s a very loose sketch of one of the unreleased jams Miles Davis recorded as part of his “Jack Johnson sessions” in 1970.  There is only sparse percussion and no bass at all, so it’s Keith Jarrett’s comping alone that holds the structure together.  Keith’s playing is my favorite part of the track, as he keeps some semblance of continuity while setting a quiet backdrop for Miles and John McLaughlin to experiment with textures and effects.  Most of the pieces the band recorded were meant to be edited into coherent songs later on, so there is little structure or continuity to be found, but it’s well worth a listen and fun to jam on as well.

While driving home from a gig late last night, I was looking for some music to keep me awake and landed on Miles Davis’ 1986 album Tutu.  I hadn’t listened to it in many years, and I admit I probably won’t listen to it again soon.  The overdone studio production sounds dated, and in my opinion Miles’ personality gets lost in the mix.  His musicianship shines through as always, but this is obviously a Marcus Miller project featuring Miles rather than the other way around.

Marcus wrote and programmed most of the music on Tutu, and I enjoy his playing on the record, but the panoply of synthesizers and drum machines feels less like a coherent musical statement and more like a faddish costume Miles is wearing to attract a pop audience.  This isn’t to say the songs themselves don’t have merit; I just prefer the spontaneity and verve of a live band.  Some of Miles’ songs from this era get much more satisfying treatments on Live Around the World.

Anyway, the album did its job in keeping me alert, but out of all the funky faster tunes the one I kept coming back to was the ballad “Portia”.  Something about it really fit the mood I was in, driving through foggy dark forests and empty city streets.

Coincidentally, the same day I posted Joe Henderson’s “Our Thing” I was asked to learn Joe’s arrangement of “Miles Ahead” for a gig.  This version can be found on the Verve album So Near, So Far.  Each of Joe’s albums for Verve featured the work of one composer, in this case Miles Davis.  Here’s the chart I wrote for the band: 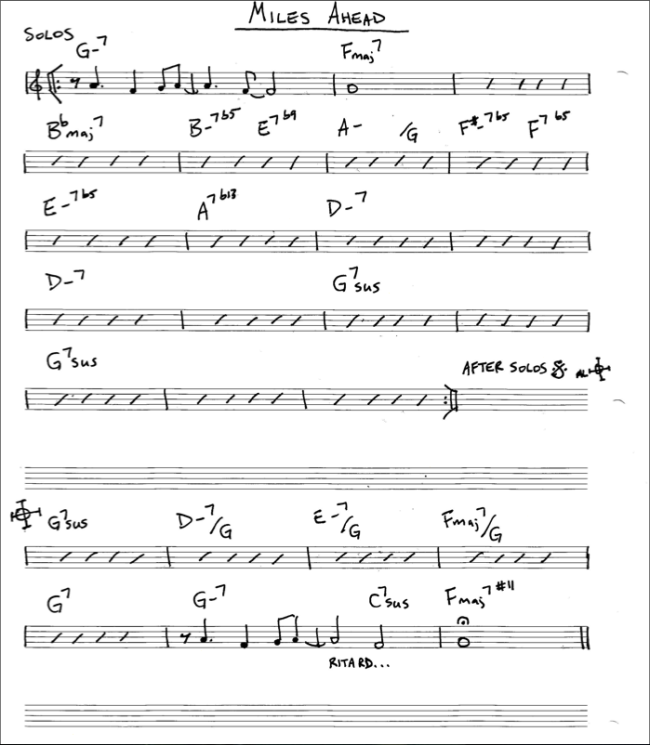 Joe’s quartet is squared by John Scofield, Dave Holland and Al Foster.  A decade later this same rhythm section collaborated with Joe Lovano as ScoLoHoFo (about whom more next week).